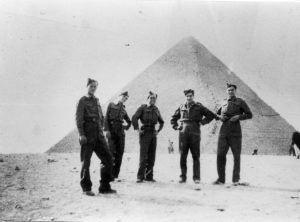 A Second World War less-known story about ordinary people recruited by British Intelligence and sent in a mission in German-occupied Eastern Europe, to find escape routes for the Allies’ war prisoners and organize the resistance. A very daring mission, for some young Jewish people from Palestine, to return to their countries of origins, to defy the “final solution”.

Two years after the war started, fearing the destiny of a numerous group of war prisoners, mainly air crew members, British Intelligence realized they do not have any agents in Eastern Europe, their Russian allies are not to be trusted and there is no time to infiltrate British spies either. An odd proposal came out – 250 Jewish immigrants from Eastern Europe in Mandate Palestine, volunteered to be trained by British Intelligence as to be sent behind the enemy lines, in their countries of origin occupied now by Germans.

Only 110 underwent training. Thirty-two were eventually parachuted and some infiltrated the target countries by other routes. Three of the parachutists infiltrated Hungary; five participated in the Slovak National Uprising in October 1944, ten parachutists served with British liaison missions to the Yugoslav partisans and nine parachutists operated in Romania to offer information and to try rescuing 1100 American and British prisoners of war. The Germans captured twelve and executed seven of them, among them Hannah Szenes, who became the best-known figure from the group. How does their story unfold, in that very hot moment of the war, in East Europe and which was the deal between British Army and Mossad?