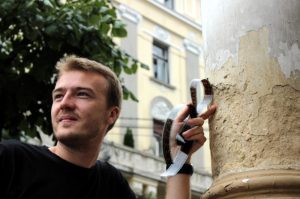 A 18 year old teenager receives an odd request from his father: he asks him to try to convince his best friend, a 40 year old man, to not commit suicide. Cristian Pascariu’s first feature film. Developed in the frame of the ScripTeast program.

Born in 1987 in Botosani, Romania. In 2010, Cristian Pascariu graduated the Faculty of Theater and Television in Cluj Napoca. His thesis film, called Rock`n`roll Sticks,  won the Black Pearl Award at the Abu Dhabi Film Festival 2010, and the Award for Best Student Film at the Open Society Shorts 2011. His short films have been selected in film festivals around the world including Uppsala Short Film Festival, Transilvania International Film Festival.