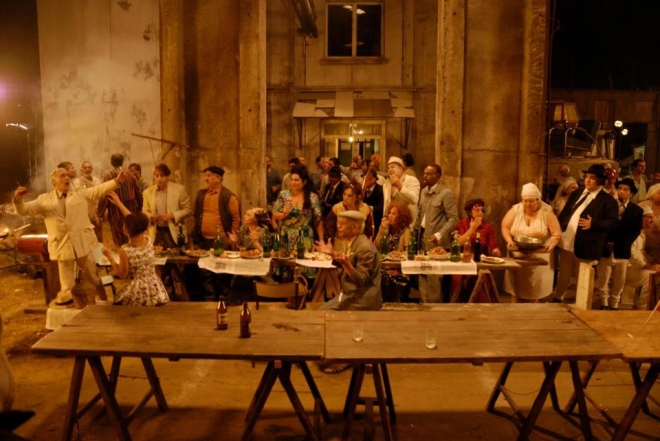 Somewhere in Palilula, written and directed by Silviu Purcărete, will be available from April 2012. The movie will be launched in theathers around Romania.

The film is placed in the 60s in Romania and tells the story of Serafim, a fresh graduate of medical school, brought by a gloomy whim of destiny to the town of Palilula.

Nowhere, that is. Palilula is a ghost town, lost in the middle of the Vallahian plain. A quarantine area, a sanatorium, improbable hospital, a gynecological clinic in a settlement where no child is born. A community of Italians who forgot their language, but not the nostalgia of their canzonets. Italians with Danubian taste and disorientation. The young doctor Serafim will not get to practice his profession as a pediatrician, in this childless town. He will be drowning in the sweet and poisoned honey of the place, like a fly caught by a frog.

Among main actors are top-Romanian names such as Dimeny Aron, George Mihăiţă, Răzvan Vasilescu, Ofelia Popii, Constantin Chiriac or Horaţiu Mălăele. Director of Photography is Adrian Silişteanu, a long-term collaborator of director Adrian Sitaru, while music is being composed by Vasile Şirli. Art directors are Helmut Sturmer and Dragos Buhagiar.

Somwhere in Palilula is produced by Libra Film Productions, with the support of The National Cinema Center (CNC) and the MEDIA Programme of the European Union. The script was well appreciated internationaly and won the „Balkan Fund” Award at Thessaloniki International Film Festival.