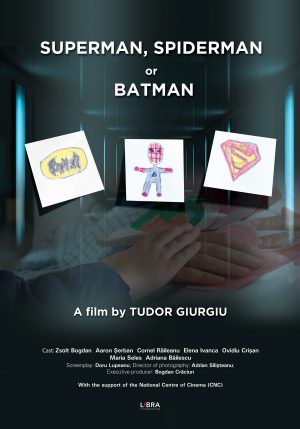 Manhattan Short is a global event which took place in over 300 cities across 6 continents during one week. The winners of the festival were elected  by the votes from over 100,000 people who had the chance to watch the 10 shorts selected from a total number of over 600.

Thereby, with 19.549 votes, Superman, Spiderman or Batman won the Gold Medal of Manhattan Short, outrunning the second place of the Netherlander short “A Curious Conjunction of Coincidences” with more than 4000 votes.

Recently Superman, Spiderman or Batman won the “Best Short”  at Kaliber 35 Munich International Short Film Festival from Munchen Germany. In April 2012, won the prize for ”Best fiction short film” at the Aspen Shortfest, one of the most renowned short film festivals in the United States of America. This prize makes Superman, Spiderman or Batman eligible for a nomination at the Oscars, Live Action Short Film category.

Superman, Spiderman or Batman, has also been nominated, alongside other 14 short films from Europe, for the short film category of the European Film Awards 2012, which will take place in Malta on December 1st.

The script was written by Doru Lupeanu, also known for his script for the short Faţa galbenă care râde (The Yellow Smiley Face), directed by Constantin Popescu.