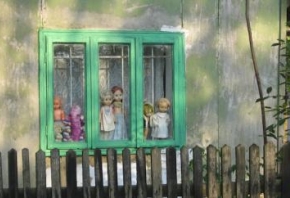 Birds Way is a magical realist story, an Eastern European fairy tale – a creative documentary that follows the daily routine of an Old Believer community struggling to survive and maintain their traditions in spite of the overwhelming intrusion of modernity.

In the Danube Delta, in Periprava, the old ones die and the traditions are lost. The Lipovan community, made up of old-rite believers, has remained without a priest. The priest has ever since been chosen from the community and he did not need to have theological studies. Now, the old priest is ill, bound to the bed for some time, and the new one cannot take care of his duties because he is unmarried and there is no girl willing to become a priest’s wife. The villagers are desperate – funerals are performed by the deacon, and the Easter and Christmas services are also held without a priest. The villagers remember that when they were children and the cries of the prisoners on the Danube were heard and the parents were lying to them that it was nothing, just the cry of the birds. “We are sinful”, the villagers say to themselves, looking into the past. The film follows three years from the community life, where recent changes and modernization unveil the fragility and vulnerability of a traditional society.