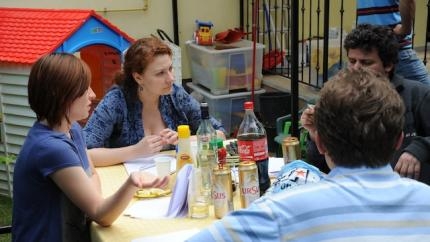 The short film “Camelia”, signed by Marian Crisan, tells the story of an ordinary gathering that takes place in a residential area. The story revolves around an absent character (Camelia), who, in spite of that, has a major impact upon the ones present.

Florin, a thirty something man, is coming back from work. He works as a sales agent for a car company. He and his wife Alina have just moved in their new dream house in a Bucharest residential area. Secretly wanting to meet Camelia, who is in town for the week, Florin invites some old friends over. It’s Tuesday and his wife thinks it’s not the right moment. But Camelia leaves Bucharest to fly back to New York on Friday so it will be a last chance for Florin to see Camelia again.