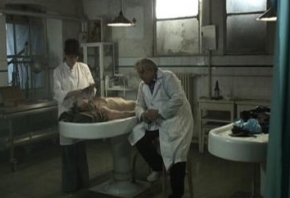 The film tells the story of an old man, hit by a tram that is brought at a hospital morgue from Bucharest. When Cecil Bulumac (the doctor) and the nurse are ready to start the autopsy, they realize that the old man is still alive, but is serious injured and needs help. Frightened by the thought that police might come, they decide not to call a doctor, waiting for the man to die