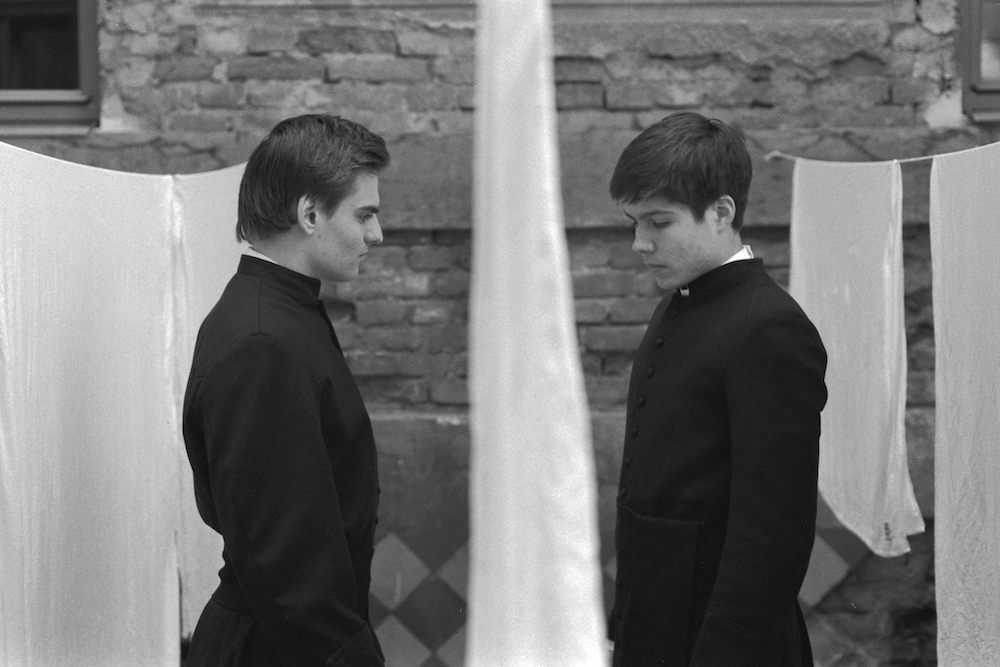 Fresh from Berlinale, after the world premiere in the Encounters new section, on February 24:

“[…] Ostrochovsky styles Servants with the flair and unease of film noir, while ramping up the tension almost to horror-movie levels. Shot in black-and-white, in Academy ratio, and with a droning, needling soundtrack, the images bristle with anxiety. […] As well as meticulous visual command (reinforced by blunt, almost-jarring edits), Ostrochovsky demonstrates an impressive mastery of tone.” – Screen International

Servants / Discipolul,  the second feature film of Ivan Ostrochovský, co-produced in Romania by Oana Giurgiu and Tudor Giurgiu, has its world premiere in the Encounters competition, at the 70th edition of the Berlinale Film Festival (20th of February – 1st of March) ).

A drama inspired by the real stories of priests who had the choice between collaborating with the secret police and resisting, in communist Czechoslovakia, the film has Vlad Ivanov in one of the central roles.

Servants is a Slovakia-Romania-Czech Republic-Ireland co-production, the historical context in which the action takes place is similar to the one in Romania, where the collaboration of priests with the Securitate is still a hot topic.

The year is 1980. Michal (Samuel Polakovič) and Juraj (Samuel Skyva) are students at a theological seminary in totalitarian Czechoslovakia. Fearing the dissolution of their school, the tutors are moulding the students into a shape satisfactory to the ruling Communist Party. Each of the young seminarians must decide if he will give into the temptation and choose the easier way of collaborating with the regime, or if he will subject himself to draconian surveillance by the secret police.

Ivan Ostrochovský, a rising name in European cinema, is at his third selection at the Berlinale Film Festival. In 2014, the feature documentary Velvet Terrorists, co-directed by Pavol Pekarčík and Peter Kerekes, premiered at Berlinale, where it won the Tagesspiegel Readers’ Award. In 2015, he returned with his fiction debut, Koza, selected and subsequently awarded in dozens of festivals.

The script was written by Rebecca Lenkiewicz (known for award-winning films such as Ida, Disobedience or Colette), together with Marek Leščák and Ivan Ostrochovský.