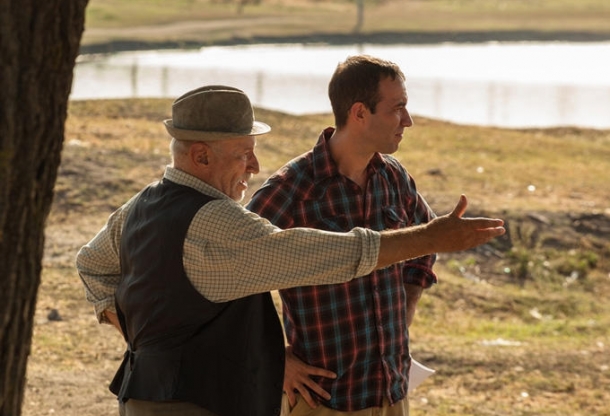 The Japanese Dog, Romania’s entry in the race for the foreign-language film Oscar, ended the year in New York and started 2015 in Palm Springs, continuing its tour in the United States during the awards season.

Initiated and co-presented by the Romanian Film Initiative, in partnership with the Film Society of Lincoln Center and the Jacob Burns Film Center, Making Waves is the only comprehensive US festival dedicated to showcasing and celebrating the best in Romanian contemporary cinema as well as rarely seen classics.

“Starring Victor Rebengiuc (Forest of the Hanged, Niki and Flo), the film is about family reconciliation and has a touch of Ozu. Following a devastating flood, a reunion takes place between a villager and his estranged son”, wrote the Making Waves organisers. Next to Rebengiuc, the film features actors Șerban Pavlu, Kana Hashimoto, Ioana Abur, Constantin Drăgănescu, Alexandrina Halic and Laurenţiu Lazăr.

The Japanese Dog is an very convincing debut of a promising director Tudor Crstian Jurgiu,” said Corina Seteu, Making Waves festival board president. “The film is well built, convincingly designed, and with a story that everyone can relate to in [today's] world. The lonely old father from a village chooses to mend the relationship with his son who lives and works overseas who is familiar with a totally different culture. He chose to give up his life in Romania and go live far, far away. It is so improbable, that it can only be true. The film answers a profound dilemma of modern societies in relation to a certain atypical sense of belonging. It is very original and also very simple. The selection committee was surely impressed by the story, the subject, and the acting and the way the film is put together like an 'open promise.”

The Japanese Dog was also part of the selection of the New Directors/New Films festival in New York, in April 2014. Co-organized by, the Film Society of Lincoln Center and MoMA (Museum of Modern Art), the festival is internationally famed as one of the main film events focusing on discoveries and debut films.

At Palm Springs International Film Festival, “The Japanese Dog” screened in two programs, on January 3rd and 5th , Another Europe and Awards Buzz. The latter is an annual showcase of Foreign Language Oscar contenders.

“The Japanese Dog” is a Libra Film production made with the support of the Romanian CNC, HBO Romania and the MEDIA Programme of the European Union. The original screenplay was written by Ioan Antoci.