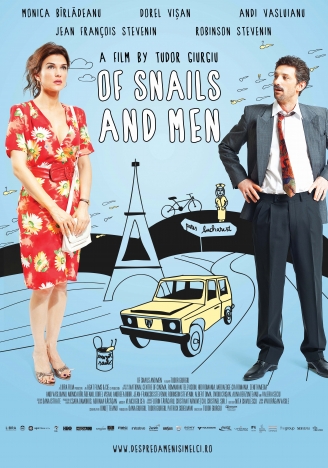 The distributors, Transilvania Film and Ro Image, have put together an impressive promotion campaign, aiming to register a record number of viewers for a Romanian production and, at the same time, intending to bring this film to the audiences in towns and areas which lack cinema theatres, by using alternative screening options. To that effect, 3 mobile teams were put together to screen Of Snails and Men in different Romanian towns, in theatre halls and cultural centers, according to a screening programme which will be announced in advance.

In addition to the traditional promotion means (outdoor, print, TV), the distributors have decided to invest in a massive on-line campaign, in the making of personalized video materials and clips, in sampling activities and in setting displays and unconventional materials (e.g. snail cans with the film's main characters), wishing to catch the attention and trigger the interest of the viewers.

The movie's official website, www.despreoamenisimelci.ro, includes both extensive material from the shooting period and news, details on the unconventional campaigns ran and testimonials with filmmakers, cast and crew. Here, visitors can also check the weekly screening programme in cinema theatres or the special locations for their respective cities.

1992, Cîmpulung Muscel, Romania. The ARO car factory is bankrupt and about to be privatized in one week. It's going be sold to a French company which means to turn it into a snail farm. Out of the 3,000 workers employed here, only 300 will keep their job. Everything changes however when one of the guys finds an original solution meant to save his mates from unemployment and the factory from bankruptcy.

In Of Snails and Men, audiences will have the chance to enjoy performances by well-loved Romanian actors such as Andi Vasluianu, Dorel Vişan, Monica Bîrlădeanu, Andreea Bibiri, Valeria Seciu, Ovidiu Crişan, Ion Grosu, Clara Vodă and Alina Berzunteanu, as well as the renowned French actor Jean Francois Stevenin and his son, Robinson Stevenin. Jean Francois Stevenin played important parts in films by directors such as Francois Truffaut, Jacques Rivette, Bertrand Blier, Jacques Demy and Jean-Luc Godard, this being his first role in a Romanian movie.

The script belongs to Ionut Teianu, who moved to France in 1991, after he graduated the Film and Drama University in Bucharest. Cinematography is signed by Vivi Drăgan Vasile and Vlaicu Golcea is the film's music composer.

Shooting took place in various locations in Bucureşti, Călaraşi, Amara, Targoviste, Breaza and Ploiesti and it lasted 6 weeks. The film received financing from the National Film Center (CNC) in the 2010 summer Call for projects and benefited from financial support from Eurimages and the MEDIA Programme of the European Union. Moreover, South Eastern Cinema Network (SEE Cinema Network) granted it a prize for script development. HBO Romania has also contributed to the financing process.

On  Snails and Men is a Romanian-French co-production, produced by Libra Film (Romania) and Agat Films (France).

The film is scheduled to premiere on September 14th in theatres across the country.

The film is distributed in theatres by Transilvania Film in collaboration with Ro Image.