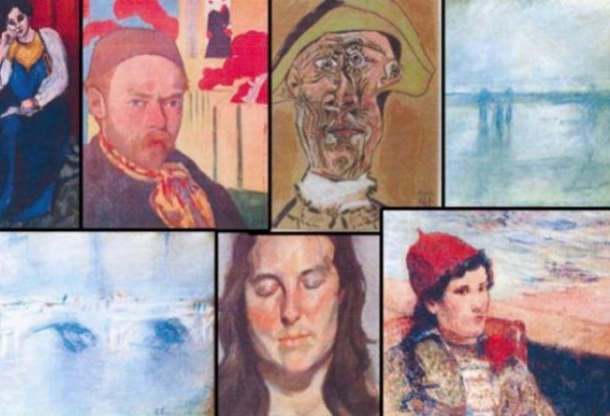 On October 16, 2012, a gang of six Romanian men stole seven paintings from the Kunsthal Museum in Rotterdam. Now they’ll become the subject of a feature-length movie.

Photographer Cristian Movilă and producer-director Tudor Giurgiu will develop the movie, which illustrates the exciting action leading to the possible destruction of some of the works, whose value exceeds 18 million euros. That’s transformed the burglary into one of the most notorious and high-profile burglaries in the world.

The July 26 print edition of the New York Times told the story through Andrew Higgins’s article A Trail of Masterpieces and a Web of Lies, Leading to Anguish. The front-page article was illustrated with Cristian Movilă’s photographs.

The article describes the "greatest robbery of the last decades" in cinematic style, presenting the main characters involved in this case, as well as the village of Carcaliu (Braila county), which became the main background of the action from the moment Olga Dogaru, one of the suspects’ mother, said that she had burnt the paintings in a stove.

The team led by Cristian Movilă and Tudor Giurgiu is meeting now the prosecutors who are conducting the investigation and have already interviewed those who committed the robbery. The team is working together to draft the script.

Cristian Movilă: "The topic has extraordinary potential. The visits to Carcaliu, the discussions with those involved, the special atmosphere in the village – all of that convinced me that there is enough material for a really special movie. I contacted Tudor, a longtime friend and collaborator, and I am confident that together we will be able to bring this story to the big screen. It’s a fanciful story but it’s also real. It’s a modern story involving centuries of history. What is the value of the artwork and how much does it vary according to the public who appreciates it? We all saw the paintings, priceless artworks worth millions of euros, but how much is a Picasso really worth in the hands of a mother who thinks she’s helping her son?”

Tudor Giurgiu: ”We have already received collaboration proposals from some producers in the United Kingdom, the Netherlands and the United States. The subject sells itself, and it’s an excellent excuse for an action movie that is different from most movies in this category. The speed at which the theft occurred,  the psychology and motivation of the thieves, and the fact that they come from an isolated village mostly inhabited by the elderly, will give specific color to a story with universal flavour. We are investigating the possibility of producing the movie in English, with an international cast, including top European and American actors”.

The stolen artworks are "Tete d'Arlequin" by Pablo Picasso, "La Liseuse en Blanc et Jaune" by Henri Matisse, "Waterloo Bridge" and "Charing Cross Bridge" by Claude Monet, "Femme devant une fenetre ouverte, dite la fiancee" by Paul Gauguin, "Autoportrait de Meyer de Haan" and "Woman with Eyes Closed" by Lucian Freud. The seven paintings, which are worth tens of millions of euros, were stolen in the Netherlands in only 2 minutes and 48 seconds. They were brought to Romania in three pillows and it seems that they ended up in a stove in the Carcaliu village. The prosecutor’s investigations, however, are ongoing.

Libra Film is one of the leading film production companies in Romania.

Between 2000-2012 Libra produced 27 films, out of which 13 were international coproductions.

Libra Film was behind award-winning films such as Katalin Varga, by Peter Strickland, Silver Bear at Berlinale 2009 and European Discovery of the Year at the EFA Awards, the short Superman, Spiderman or Batman, by Tudor Giurgiu, awarded as Best European Short Film, at European Film Awards in 2012 or Tudor’s 2nd feature, Of Snails And Men, awarded in Warsaw Valladolid, Los Angeles, Palic IFF. Libra was also the local partner for Kornél Mundruczó’s Cannes 2008 competition film Delta, awarded with FIPRESCI award and co-produced the directorial debut of French actress Fanny Ardant, Ashes and Blood. Most recent international coproduction is Spanish film Cannibal by Manuel Cuenca, which will premier soon in Toronto and San Sebastian.